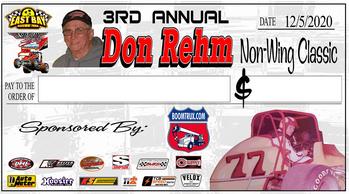 The 3rd annual Don Rehm Non-Wing Classic once again served as the season finale for the Top Gun Sprints with a field of 24 cars on hand for the 25-lap feature. The event saw a $1,500 pay out for the winner, but the effort of supporting individuals and businesses drove an addition $3,000 to benefit all positions, along with contingency awards.
Four heat races were held to increase the odds of a payout for the series’ Lee and Jeff Barfield Memorial Clean Sweep, which had elevated to $1,200 since it had gone unclaimed for the past three races. In those four races, the eventual winner came from the second row with Justin Webster, Brandon Grubaugh, Shane Butler and point leader A.J. Maddox securing the wins.

Those heat race winners would be relegated to the third and fourth rows for the main event. On the initial start, Tyler Clem sliced from the second row to the lead, but a single car spin negated the start, forcing a complete restart. At the next green flag, front row starter Steve Diamond shot to the top spot with Clem in tow. Butler vaulted to second on the fourth lap and began to hunt down Diamond. Butler was able to use the confusion of lapped traffic to slide by for the lead, bring Maddox along to second on lap six. Two laps later, a Ryan Bartholomew spin off turn two collected Andy Griffin, who flipped after contact. A 10-minute red flag period ensued before the field gathered for the restart.

Butler and Maddox developed their own race, reminiscent of last year’s contest. Grubaugh was on the move, slipping by Clem into fourth. On lap 12, Maddox made his move in turn four, scooting out front while Grubaugh went to third. A Nathan Barouch spin on lap 18 happened right in front of Maddox, who dodged the mishap successfully. During the caution, Grubaugh retired with mechanical issues, moving Diamond back to third.
Butler began to close in on Maddox as the field drew within five laps of the finish. On lap 21, Butler as able to get by, but Maddox regained the lead by the time the duo came to the stripe. The win was undecided through the final turns as Maddox charged home with the victory.
The win marked the fourth Top Gun Sprints win of the year for the defending champion, who parlayed his finishes to the 2020 title. Maddox now becomes a four-time series champion. This title marks the first time Maddox was able to successfully defend the previous year’s crown.
Top Gun Sprints will open their 2021 season at East Bay Raceway Park as part of the 45th annual Winternationals, Feb. 4-6, 2021.