Night two - The 2021 Top Gun Sprints season saw plenty of excitement. Four-time and defending series champion A.J. Maddox grabbed the lead at the start from the outside front row spot. An early caution bunched the field with Thursday winner Justin Webster sitting in second. On the restart, Webster and Butler were swapping position until heat winner Robby Hoffmann took command of the runner-up spot on lap six. While Butler began to fade, Webster renewed his challenge, catching and passing Hoffmann on lap 18 and wasting no time to get around Maddox for the first lead change of the race. The caution came out for a Hoffmann spin and it looked like Webster’s pass would have been for naught, but the lap counted and the new leader would be in charge at the green flag. Garrett Green, who started 15th and Danny Martin, who had visited the pits early and re-started from the tail, shot by Maddox to hound Webster. Martin would gain second on lap 22, then grab the lead at the line on lap 23. With the white flag waving, Webster regained the lead and the two raced to the checkered flag. At the finish line, Webster prevailed by 0.036 seconds for his second consecutive win.
Joining Hoffmann as heat winners were 2020 East Bay Raceway Park Sprints champion Steve Diamond, Brandon Grubaugh and Tyler Clem. None of the heat winners were able to claim the Lee and Jeff Barfield Memorial Clean Sweep award, which will increase to $600 for the next event.
The final night of East Bay racing for the Crate Racing USA Late Models and Top Gun Sprints as part of the Winternationals will take place on Saturday night with the Late Models seeing $10.000 awarded to the feature winner.


Night 3 - The Top Gun Sprints held their final 2021 Winternationals event with 23 cars on the grounds for the Saturday finale. Billy Bridges dominated the opening heat race, two-time defending champion A.J. Maddox captured the second preliminary and the third heat race saw the fans on their feet for the finish as Joe Zuczek edged Robby Hoffmann by .007 seconds. The heat winners now had their sights set on the $600 offered in the Jeff & Lee Barfield Memorial Clean Sweep.

With fast cars on the front row, it did not take long for the action to get intense. Two-time feature winner Justin Webster rocketed off the pole for the lead as the front cars quickly caught the back of the field. Webster would see a challenge from Hoffmann early on, but the mastery of lapped traffic was again on display. At one point, Webster swept around five cars in the third and fourth turns to find some free space. The position battles were taking place from second back as Shane Butler was finally able to bypass Hoffmann for second on lap 16.
With all of the action around the race track, the only thing missing was a caution flag as the field of 21 starters kept the caution flag in its holder from start to finish. Webster was able to add his third straight birthday, celebrating his mother’s birthday with a 25-lap victory. The winner told the crowd how the crew found a broken valve spring keeper in an engine inspection and, with the help of other teams who had spare parts and tools, the eventual winner was able to be competitive on the third night of action.
Top Gun Sprints will resume their season on March 6 at Hendry County Motorsports Park. 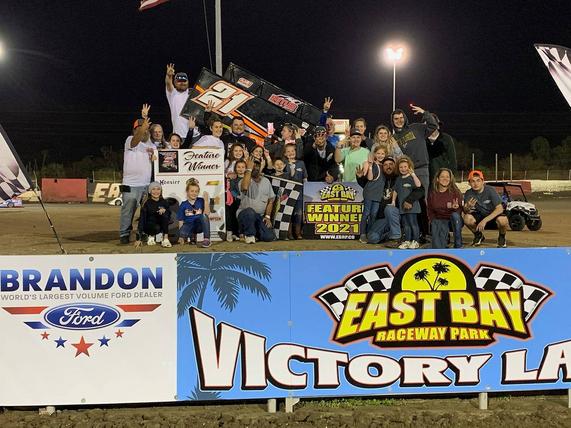 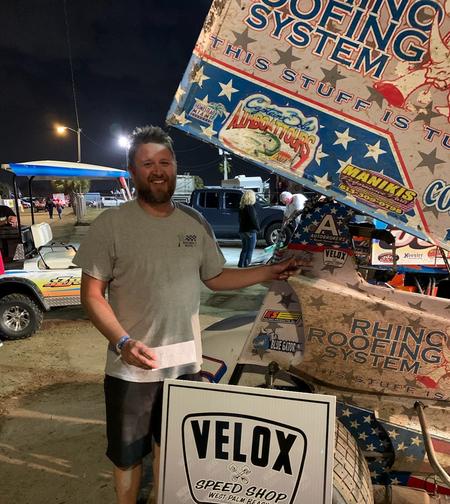